As the new year begins, it is filled with goals, visions, ideals, and sights set high.That’s not a bad thing, per se. But I think what we would be wise to also keep in the forefront the reality that with great change comes discomfort.

If we think about making a great change in our lives, we must be willing to live— authentically live— in the space where there is friction between how we used to do things and how we envision doing them. We must step out of the status quo, be uncomfortable, and frustrated. If we are honest with ourselves, it’s scary. Fear is real; yet moving beyond it can bring feelings of exhilaration and excitement. The trepidation on the path to change is a manifestation of fear trying to hold us back from realizing those grand visions we put forth during this season.

In the realm of race relations, I don’t know many people who would explicitly state that they desire to lead racially isolated and segregated lives. Quite the contrary,people have rainbow coalition dreams of children of all races holding hands skipping and people living and working together in harmony. But, let’s get real;we have a great deal of work to do to authentically live in that vision. Whether it is our own fear, our lack of exposure, relationship, or even opportunity, there is gap between where we are and where we want to be. 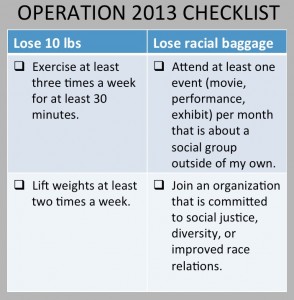 So just as we map out exercise plans and goal-set around business objectives,initiating growth in our personal and community race relations is a also a worthwhile endeavor.

Throughout the year I will share tips and personal stories about how I, and those around me, are working to make integration real in St. Louis. It will mean rejecting the status quo of our social circles and will most likely involve some missteps. Yet,to ever get to the place we envision, where we can be in authentic relationship across lines of difference, where that happens more often than it doesn’t, we have to shed some racial baggage. Just as physical movement aids in shedding weight,social movement aids in shedding racial weight. Exploring our own identities and educating ourselves about other social groups is the way to move forward towards the goal of having interactional diversity rather than mere numerical diversity.

Join us in working to “be the change you wish to see in the world.”